Sign up for our newsletter and get 5 TIPS TO IMPROVE YOUR DIGESTION NOW!Sign Up 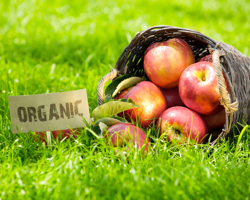 I am often asked my opinion about organic food vs conventionally grown, and if you have asked, you know that I would prefer to buy everything organic, and generally stick to the Dirty Dozen/ Clean 15 as a guideline. However, our bodies are remarkable machines that can tolerate a lot and organic selections still remain much more costly, which can be prohibitive for many. However, in this day and age, we are being assaulted by more chemicals from more places than ever before. Our detoxification systems are capable, but simply overloaded. Many people wonder whether organic foods are ACTUALLY organic I wondered that too, and interviewed the then president of the Ontario Organic Council (2017) Jodi Koberinski to get to the bottom of it. In summary, I am confident that organic agriculture is better overseen than conventional agriculture. The article below was originally published in The Healthy Shopper. 2015.

There are many words bandied about in the world of nutrition. Low-fat, Natural, Gluten-Free, Non-GMO, No Sugar Added, and Organic. Clients are always asking if it is really in their best interest to buy organic. Most believe that it is a discussion based purely on nutrient value and therefore do not understand the claims. It is partly based on nutrient value, but it is mostly a discussion about our toxic load, and the effect that our food chain is having on our local ecology, which in turn, affects our economy and our future health.

The biggest question I hear is: “How do I know if something is actually organic?”

Organic certification is greatly misunderstood in Canada. In summary, we do have a very diligent, federally monitored certification process. Within the Ministry of Health, there is the Canadian Food Inspection Agency. In addition to all labeling regulations, this Agency is responsible to oversee organic claims made by producers and processors in Canada. In 2009, in response to requests from the organic sector, and by consumers, the CFIA introduced a regulated system and standards for organic agricultural products that wished to bear the Canadian Organic logo. This accreditation covers plants, food, and feed for animals. Ultimately, the CFIA is the governing body, however, it operates through a group of sub-contracted and impartial certification bodies.

Certifiers are considered to have a high degree of impartiality. They are not consultants or advisors. That is outside of, and contrary to, their scope of service. Their role is to provide standards and regulations, and to verify the criteria is being met on their initial and annual inspections. Once producers meet the standards, they receive a non-expiring license, this license is paid for and renewed annually dependant on criteria always being met. Producers and processors get to use the coveted Canadian Organics label on their products which lets consumers know that they are independently audited for authenticity. Of interest, at the provincial level, the only provinces governing Organic through regulations are Quebec, Manitoba and New Brunswick where it is mandatory that organic producers meet federal standard requirements for organic products. In the rest of Canada, it is very much market driven and voluntary.

Make no mistake, meeting these standards is a grueling and dedicated process.

I recently had the pleasure of speaking with Jodi Koberinski, from the Organic Council of Ontario (OCO) to discuss some of these issues. Koberinski is like a virtual encyclopedia of most things organic. The OCO exists to support a shift in Ontario towards sustaining and organic agriculture. The OCO seeks to advocate for policy, research & training in support of the organic sector; protect the integrity of “organic” in the current context of the Canada Organic Standards; and inform the public on the full value of organic agriculture. It is a membership based organization that includes producers, processors, distributors and retailers. 80% of its funding comes from its membership, with 20% grant-based. This means that in their discussions with government groups they can maintain their integrity and independence when policy decisions need to take place.

In response to our first question, “How do I know if something is organic?”, Koberinski explained this level of scrutiny simply does not exist within the conventional farming and processing industry. The organic industry has an extra layer of oversight into its practices, via the CFIA certification and verification bodies. This is in addition to the regular food safety guidelines that all food companies must adhere to in Canada. Not only that, but should there be a problem with an organic producer who is bearing the Canadian Organic label, they are immediately reported and flagged on the CFIA website. By the way, technically speaking in order to bear the label, 95% of the products ingredients must be organic. In the case of livestock, that includes their feed, and meeting proper guidelines on the animals’ living conditions. If 70% or above you can use the word organic on the label, but if less than 70%, you can only list the organic ingredients in the ingredients listing.

All of this scrutiny bears a cost my friends. That brings us to another often asked question “why are organics more costly?” Well, in addition to the very economic reality of smaller yields due to less pest control, according to Koberinski, food is a commodity, and the premium we pay for organic food is based on the fact that more people are willing to pay for the protection of not being exposed to harmful synthetic pesticides and fungicides, which are not permitted in organics. Supply and Demand. The organic segment of the food market makes up about 3% of the total market. It has grown consistently anywhere between 10-20% over the last 30 years. It stands to reason then, that as more farmland is used for organic farming, and more product becomes available, the prices would have a better opportunity to even out, even with oversight costs built in.

That’s a bit tricky, but in essence, they are – and here’s why. Organic produce is grown in such a way that encourages biodiversity in the soil. In other words, it is grown in more mineral dense soil due to the methodology, for example crop rotation. An organic farmer will not plant the same type of crop two times in a row in the same field. This is because the crops have variant nutrient requirements as well. Each type of crop kind of feeds the soil and prepares it for the next type of crop. Ultimately, we end up with more mineral content in our food. It is a known fact that conventional farming practices and the use of synthetic pesticides and fungicides have left our soil deplete of minerals, which affects the mineral density of our food product. Hence, organic food is actually more nutritious. Also importantly, it helps keep us healthier because we are not ingesting the additional toxins that are used on conventional crops.

“Do Organic farmers spray their crops?”

Koberinksi was tremendously helpful here. Again, there is a difference in how pesticides and fungicides are used between organic and conventional farmers. “It is simply a myth that organic farmers don’t use pesticides or fungicides” said Koberinski. However, the products that would be used are biodegradable, and not considered persistent toxins. In other words, they break down and disappear after their use, they do not remain in the soil. There are sprays that are simply forbidden in organic farming, and so organic farmers would not use these, or they would risk being tagged as non-compliant, and risk losing their license. According to Koberinski, this may not be the case among many conventional farmers. Not only is the pesticide list greater in number, but there is much “off label” use as well, which means that products may be used for purposes other than what they are intended for. Its kind of like sprinkling drain cleaner over your corn flakes.

People seem to have an easier time understanding the differences between organic and conventional practices when it comes to fruits and vegetables, but what about the egg, dairy, beef and chicken industries? What about imported foods? All you need to remember here is that there are standards to which all food producers must adhere to, however, any claims by the conventional sector are not overseen. That only happens in the organic sector. For example, chickens may not be allowed to be given antibiotics within a certain time of their slaughter, however, their feed is laced with it.

“What about food brought in from other countries?”

According to Koberinski, the organic claim would depend on the country it comes from. For example countries that are part of the NAFTA agreement would find it in their best interest to adhere to our practice guidleines, and often end up using similar certification bodies, however, some other countries may simply use their own guidelines. Koberinski says that only about 2% of crops coming into the country are ever tested.

Occasionally, we hear a news report that suggests that toxic residue was found on organic produce. Oftentimes both the research and the reporting is sloppy. Without going into specific reports, Koberinski suggests that our takeaway be this – “In choosing organic, you are at least 5x’s less likely to be exposed to pesticides. As a sector, there is an inherent promise not to add toxic load to our planet”.

There is simply no area in our food chain where this type of oversight exists.

Well, now that we know more about how much commitment is involved in organic production, I think we are safe to assume that buying organic is the right choice, as often as possible.

Look for Canadian Organic, Foodland Ontario Organic and Non-GMO labeling and you are good to go.

Written by Bonnie Wisener (2015) originally published in The Healthy Shopper.

Sign up for my newsletter and get "5 Ways to Improve Your Digestion!"